Human studies on implants with the same design but with different surfaces are lacking at the present time.

The aim of this study was to compare the survival rate of and marginal bone loss (MBL) around 2 types of implants with the same design, but with different surfaces: fully “sandblasted and double-etched” (SDE) implants and hybrid (H) implants, with an apical SDE-surface and a coro- nal machined-surface.

SEM and profilometer analyses revealed no differences between the SDE-surfaces of either SDE- or H-implants. Transverse ridges and grooves characterized the machined portion of H-implants, clearly influencing the profilometer analysis. In 75 patients, 37 SDE and 38 H-implants were placed and all functioned completely after 12 months. In both SDE- and H-groups, MBL had a significant inverse relationship with AH, with greater intercept and negative slope for SDE-group and intersection of the 2 regression lines at AH 5 2 mm. 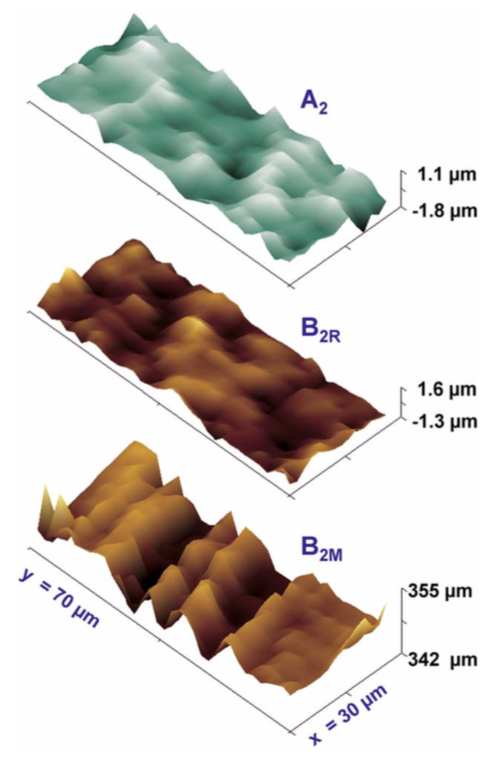 Rehabilitation of partially or totally edentulous patients with implants is a worldwide practice in dentistry, with well-established and predictable procedures confirmed in numerous studies. The first documented case of implant rehabilitation dates from approximately half a century ago, and the first long term review was published 35 years ago. Implant therapies can be considered highly successful, as survival rates ranging from 85% to 99% have been reported.1–3 Mandibular implants have shown higher success rates when compared with maxillary implants.1,4,5 Several explan- ations have been advanced to justify this difference, but higher quality and density of jaw bone play a fundamental role.2

Many implant types, with different structure and design, have been proposed to improve performance and increase implant success, but all implants kept the traditional machined surface for 35 years or more. Over the last 12 years, however, machined surfaces have been widely replaced by so-called “osseoconductive” surfaces (titanium plasma sprayed, hydroxyapatite (HA) coated, or acid etched surfaces), with the purpose of increasing bone-to-implant contact (BIC) and ensuring faster and better osseointegration. In regenerated sites, such as augmented maxillary sinuses, the survival rate of implants with osseoconductive surfaces has indeed demonstrated to be higher when compared to implants with machined surfaces.6 Implants with osseo- conductive surfaces performed better both clinically and histologically, in both pristine and grafted bone. Human histological and histomor- phometric studies demonstrated greater BIC around implants with osseoconductive surfaces when compared to implants with machined surfaces.7,8 On the contrary, clinical effects of implant surfaces on long-term success seems to play a minor role in terms of implant sur- vival rates.9–12 Moreover, an experimental study showed that both HA and titanium plasma-spray surfaces accelerated peri-implantitis pro- gression with consequent higher failure rates.9 Reports of alarming fail- ure rates of fully etched-, HA-, or TPS-treated implants indicated that a osseoconductive surface near the implant-abutment connection could increase mucosal complications and indicated that the bacterial biofilm could be more easily debrided in presence of a machined surface.13

Evaluating different implants surfaces, a systematic review showed a 20% lower risk of peri-implantitis around machined implants over a 3-year follow-up period.10 When machined implants are utilized, the risk of peri-implantitis could be considered only less probable as evi- denced in a retrospective study by Simion and colleagues.14 Further- more, a recent study found that also implants with rough surfaces had a 20% increased risk of facilitating peri-implantitis over a 3-year period.12 The claim that machined-surface implants reduce peri- implantitis and consequent bone loss more successfully than osseoconductive-surface implants, however, remains controversial.

The positive effects of machined surfaces on peri-implant soft tissue has been evidenced in a human study in which histological samples were taken from machined and acid-etched titanium healing abutments and were compared.15 Therefore, considering different findings and dif- fering behavior of different surface treatments, a hybrid implant design has been developed and produced commercially to better exploit the advantages of machined and etched surfaces. It has, in fact, been hypothesized that this hybrid design could better ensure mucosal health and lower the risk of peri-implant disease in osseointegrated implants over time. A machined surface in the coronal region could reduce the risk of peri-implantitis, whereas an apical etched surface could, con- versely, guarantee a rapid and effective osseointegration and high BIC. However, only few short- and medium-term clinical scientific investiga- tions with limited sample sizes have been carried out at present.13,16,17

A machined surface around the implant coronal portion could determine increased crestal bone loss compared to an etched sur- face,1,18 particularly during the time between implant positioning and the first year of loading.13,14 The surface of the implant coronal portion was not the primary factor in limiting marginal bone loss (MBL). Actually, it has already been well-established that MBL amount is mainly related to implant neck design and to connection type, and that the platform-switching design19 and the internal connection20 can both statistically reduce MBL around implant necks. Additionally, the pros- thetic abutment height (AH), calculated as the distance from implant platform to the apical edge of the crown, was also a key factor in limit- ing MBL progression, as Galindo-Moreno and colleagues demonstrated in 2014.21. On multiple unit implant screw-retained prostheses, lesser MBL was recorded around long prosthetic abutments than with short prosthetic abutments.21,22 This inverse relationship between MBL and AH has also recently been found around implant cement-retained prostheses.23

The aim of this retrospective study was to analyze survival of and bone loss around implants of the same design but different surface fin- ish, specifically: either sandblasted and double etched (SDE) or machined/SDE (hybrid) surface, placed in partially edentulous patients for 12 months.