Two different implant types with a similar neck design were singularly placed in two groups of patients: the test group, with platform- switched implants, and the control group, with conventional (non–platform-switched) implants. Patients requiring bone augmentation underwent unilateral sinus augmentation using a transcrestal technique with mineralized xenograft. Radiographs were taken immediately after implant placement, after delivery of the prosthetic restoration, and after 12 months of loading. 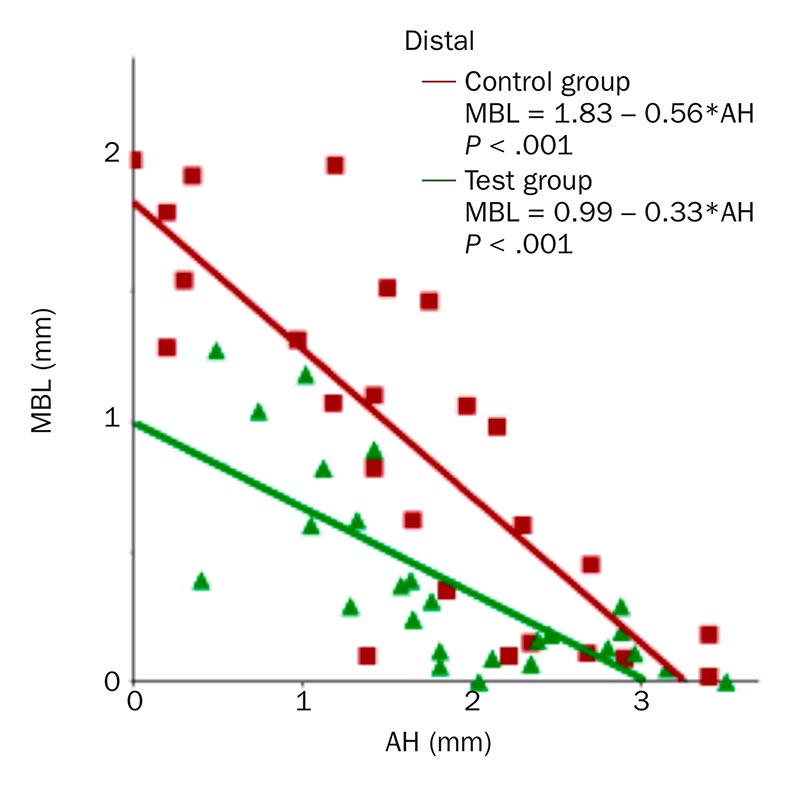 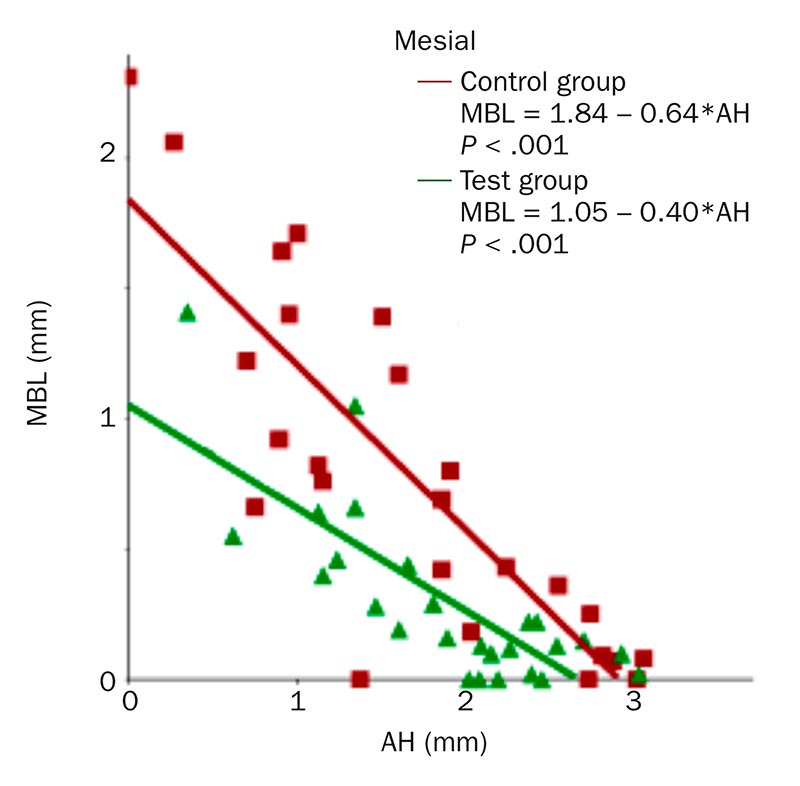 The amount of marginal bone loss occurring around implant necks has been used for many years as a criterion for defining long-term implant success.1 The etiology of marginal bone loss is not well under- stood, even if several theories have been proposed to explain it.2 An adaptive change of crestal bone level after implant placement and subsequent prosthetic

restoration was first described by Adell et al.3 Subse- quently, some authors attributed early bone loss to mechanical stresses transferred from the coronal part of the implant to the alveolar crest4 or, around cement- retained prostheses, to ‘foreign-body reaction’ stimu- lated by the presence of cement in soft tissues.5 Other studies, however, suggested that crestal bone loss may be related to the presence of a microgap at the im- plant-abutment interface.6 Irrespective of the implant system used, this internal space of approximately 10 microns would invariably be colonized by bacteria,7 causing inflammatory cell infiltration around the im- plant-abutment microgap, as histologically demon- strated in a dog model.8

A subsequent report suggested that bone resorp- tion would be reduced as a consequence of increased distance between the bone crest and the area of in- flammation produced by bacteria in the implant-abut- ment microgap.9 Consequently, a narrow abutment and the resulting mismatch with the implant neck (ie, the platform-switching concept) could reduce the vertical component of biologic width and generate a

greater horizontal distance, limiting inflammatory cell infiltration and resulting crestal bone loss.10 This con- cept could explain the clinical effectiveness of platform switching in the prevention of peri-implant marginal bone loss.11 In addition, other factors related to im- plant neck design, such as the use of microthreads and modifications in implant surface characteristics, could preserve peri-implant bone.12,13

However, the influence of mucosal thickness and bi- ologic width formation on marginal bone loss around implant necks has been discussed by Cochran et al,14 who suggested that soft tissues serve as a protective mechanism for underlying crestal bone. Moreover, some studies hypothesized that the limited amount of marginal bone loss, ranging between 1.5 and 2.0 mm, could occur to provide space for the reestablishment of the biologic width around the implant neck15 and remains constant over time after delivery of a pros- thetic restoration.16 Therefore, it could be concluded that marginal bone loss should be influenced more by the prosthetic phase than by postsurgical bone re- modeling and healing processes.17

More recently, some authors demonstrated signifi- cantly higher marginal bone loss rates around implants with shorter compared with longer prosthetic abut- ments.18,19 In agreement with these data, the marginal bone loss around healthy implants could be produced by the simultaneous actions of two different factors: the biologic width reestablishment and the inflamma- tion caused by bacteria present in the microgap form- ing around implant-prosthesis connections. Recently, Galindo-Moreno and coworkers also demonstrated that the height of the abutment plays a critical role in the marginal bone maintenance in screw-retained pros- theses, in spite of the platform-switching distance.20 Theoretically, the placement of platform-switched implants and the use of high abutments connecting cemented crowns to implants would provide greater height for biologic width reestablishment, allow easier removal of excess cement from soft tissues, and reduce bacteria-induced inflammation, consequently decreas- ing marginal bone loss around implants.

Bone features also play a role in the marginal bone loss around implants. Simons et al demonstrated that the ratio of cortical to medullar bone is a key factor in bone resorption around implants, and consequently that cortical bone could jeopardize the bone main- tenance in the critical cervical area.21 In this sense, implants placed in type 4 bone have demonstrated the best behavior in terms of marginal bone loss and success in comparison to those placed in any other locations.22 However, in terms of implant placement, there is an important limitation in the area where type 4 bone is located due to the presence of the maxil- lary sinus and the availability of disposable native

bone, which often requires grafting in order to place implants in this region. There has been debate about marginal bone in implants placed in maxillary grafted areas and how this remnant native bone is affected by types of grafting techniques.23,24 Finite element analyses have shown that the load distribution and marginal bone loss around implants placed in grafted sinus cavities may be strongly conditioned by the char- acteristics of the grafting material.25,26 Huang and co- workers reported that if the grafted area was less stiff than the pristine bone, functional loading increased the concomitant stress at the crestal bone level,27 which is typically associated with marginal bone loss.28 Clinically, Galindo-Moreno et al observed a slight, but nonetheless significant, greater crestal bone loss around implants placed in grafted bone after sinus augmentation than in pristine bone.20

Therefore, the aim of this study was to verify (1) the minimum prosthetic abutment height to minimize the bone loss after wide-diameter implant placement in maxillary bone, and (2) if this marginal bone loss could be associated with grafting using a transcrestal tech- nique, given that this technique, unlike lateral approach- es, uses the same surgical bed for sinus elevation that is created to place the implant.